Summer has come to Atlantic City but the boardwalk is empty of tourists, the casino lights have dimmed, and two Jane Does are laid out in the marshland behind the Sunset Motel, just west of town. Only one person even knows they’re there.

Meanwhile, Clara, a young boardwalk psychic, struggles to attract clients for the tarot readings that pay her rent. When she begins to experience very real and disturbing visions, she suspects they could be related to the recent cases of women gone missing in town. When Clara meets Lily, an ex-Soho art gallery girl who is working at a desolate casino spa and reeling from a personal tragedy, she thinks Lily may be able to help her. But Lily has her own demons to face. If they can put the pieces together in time, they may save another lost girl—so long as their efforts don’t attract perilous attention first. Can they break the ill-fated cycle, or will they join the other victims?

“The world was always conspiring to make young women vulnerable while labeling it as “fun.” Made it seem like we were in control, like we were making all the choices, and then it was our fault when things went wrong. Us and our short skirts, our makeup, our taste for rum, for liking the things we were told to like, wanting what we were told to want.”

Friends, I have been so skeptical, and possibly jaded, toward psychological suspense in the year of our Lord 2019, but my goodness I believe 2020 will be the year of the comeback for this genre. With more and more female authors tackling weighty subjects, such as sexual assault and gender inequality, we are discovering more and more ways to put a unique spin on these stories. One creative way that’s becoming frequent is the use of the supernatural in thriller stories, something that used to be a big no-no if you wanted to publish your novel in mainstream fashion, but I am here to tell you that the tides have changed. These stories are vacillating on a spectrum from magical realism to straight up occult magic, and this one falls somewhere in the middle.

In the beginning there were the Jane Does, and these murdered women just wanted to be found. Enter Clara Voyant (a little psychic humor for you), a 16 year old girl who is living with her addict “aunt” and running a hustle in Atlantic City. The town has slowly been boarding up, as more and more casinos and local businesses are shut down, and Clara just wants to save enough money to travel to California and be with her mother who abandoned her years prior. Clara does have powers, but they aren’t easily controlled, and foggy at best. In addition to Clara’s POV, we also meet Lily, a former local who was climbing the art gallery ladder in NYC, but has found herself returning home after a bad break-up. She’s hiding a few secrets of her own, which are revealed over the course of the novel. Luis is our final main player, a deaf and mute man who is employed at the casino that Lily begins working at upon returning to Atlantic City. He sees more than people give him credit for, and this made for an interesting addition to the narration.

Obviously one of my favorite aspects of this story was it’s slow-burning, perceptive insight into the lives of modern young women. As attributed by my opening quote, there is a large focus on the unfair expectations placed on women in society. We have a group of females being murdered, and it’s the age old case of “they were all promiscuous, or drug addicts,” the type of ladies whom the 6 o’clock news isn’t interested in covering due to their lack of social status, and therefore lack of value in the community. While it was a steadily paced tale, I was entirely engrossed from start to finish, and found myself constantly highlighting quotes and absolutely floored that Please See Us is the author’s debut novel.

The ending will be polarizing for many readers. Personally, I found myself rightfully enraged, but not at the author. The ending really felt like the most realistic, and unfortunately believable conclusion to such a heartbreaking tale, and it is one I’ll be wrestling with for weeks to come. If you’re looking for a thriller that is fluffy and solely meant to pass the time, this isn’t the book for you, but if you’re looking for a chewy tale full of suspense and intimate discussion materials, please do yourself a favor and put Please See Us on your TBR for 2020.

*Many thanks to the publisher for providing my review copy. 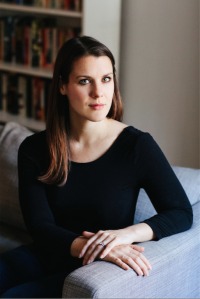 Caitlin Mullen earned a BA in English and Creative Writing from Colgate University, an MA in English from NYU, and an MFA in fiction from Stony Brook University. While at Stony Brook she taught undergraduate creative writing, served as an editor and contributing writer for The Southampton Review, and worked as a bookseller at WORD in Greenpoint. She grew up in upstate New York and the Jersey Shore and currently lives in Brooklyn. Please See Us is her debut novel.