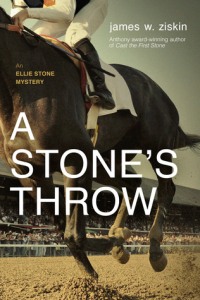 August 1962. A suspicious fire claims a tumbledown foaling barn on the grounds of the once-proud Tempesta Stud Farm, halfway between New Holland and Saratoga Springs, NY. The blaze, one of several in recent years at the abandoned farm, barely prompts a shrug from the local sheriff. That is until “girl reporter” Ellie Stone, first on the scene, uncovers a singed length of racing silk in the rubble of the barn. And it’s wrapped around the neck of one of two charred bodies buried in the ashes. A bullet between the eyes of one of the victims confirms it’s murder, and the police suspect gamblers. Ellie digs deeper.

The double murder, committed on a ghostly stud farm in the dead of night, leads Ellie down a haunted path, just a stone’s throw from the glamour of Saratoga Springs, to a place where dangerous men don’t like to lose. Unraveling secrets from the past–crushing failure and heartless betrayal–she’s learning that arson can be cold revenge.

Ellie Stone is a modern woman in a historical era; she’s driven, intelligent, and injects her own personal brand of dry humor into even the most dire of circumstances. In short, she’s an independent gal who I’d be proud to call my friend, but unfortunately not everyone sees her through eyes like mine during her era of the 1960’s. Every opportunity I get to jump back into Ziskin’s historical mysteries allows me a glimpse of how different my life would look as a female almost sixty years ago, and it reminds me to be grateful for the liberties I’ve received that ladies like Ellie didn’t have the luxury of experiencing. Once again, Ellie proves her worth in a time that didn’t appreciate her talents, but this time she also learns a bit along the way.

Prior to picking up this novel, I knew almost nothing about horse racing. The process of how folks would bet on their favorite steeds astounded me, but I feel as if I have a better grip on the sport now since the author did a fine job of explaining the ins and outs at the beginning of the story. Yay for learning new things while reading! I really enjoyed the growth of Ellie and Fadge’s relationship; while wholly platonic, I feel with each book their intimacy in friendship becomes deeper and more beautiful, something that causes me to continue the series for more than the varying cases that Ellie solves. Once again, I didn’t see the ending coming and was entirely wrong in my predictions. If you’re looking for procedural-esque novels that are both unique and humorous, give these a try! While I’ll always recommend you start at the beginning and work your way through the series, these books are written in a way where you could pick this up as a standalone novel as well.

*I was provided a free review copy via the publisher.

3 thoughts on “A Stone’s Throw”