Hey gang! Happy mid-month of April; sorry for the weirdly specific greeting, but I wanted to squeeze in a NetGalley Update while I was thinking of it. I haven’t done many content posts this month because my reading/reviewing mojo has been so on point, but I promise I’ll get back to them soon. ❤ I’ve also decided it may be fun to include some of my e-galley stats at the end of each post in an effort to keep myself accountable. If I have to stare at the whopping number of outstanding reviews I have maybe it’ll calm my trigger finger and light a fire under my tush. Tell me, how do you keep track of your review copies? Do we have any of these in common? (Also, I’ve had some of these for almost a month now… TALK ABOUT BEING BEHIND!) 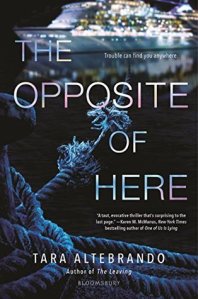 The Opposite Of Here by Tara Altebrando
Pub Date: June 5, 2018
Genres: YA, Thriller, Crime Fiction

There’s no hiding on a cruise ship-not even from yourself.
Natalie’s parents are taking her and her three best friends on a cruise for her seventeenth birthday. A sail-a-bration, they call it. But it’s only been a few short months since Natalie’s boyfriend died in a tragic accident, and she wants to be anywhere but here.
Then she meets a guy on the first night and sparks fly. After a moonlit conversation on a secluded deck of the ship, Natalie pops down to her cabin to get her swimsuit so they can go for a dip. But when she returns, he’s gone. Something he said makes her think he might have . . . jumped? No, he couldn’t have. But why do her friends think she’s crazy for wanting to make sure he’s okay? Also, why do they seem to be hiding something from her? And how can she find him when she doesn’t even know his name? Most importantly, why is the captain on the intercom announcing the urgent need for a headcount?

The moment she met Callen Hayes, eleven-year-old Jessica Creswell knew he was a broken prince. Her prince. They became each other’s refuge, a safe and magical place far from their troubled lives. Until the day Callen kissed her—Jessica’s first real, dreamy kiss—and then disappeared from her life without a word.

Years later, everyone knows who Callen Hayes is. Famous composer. Infamous bad boy. What no one knows is that Callen’s music is now locked deep inside, trapped behind his own inner demons. It’s only when he withdraws to France to drink his way through the darkness that Callen stumbles into the one person who makes the music return. Jessica. His Jessie. And she still tastes of fresh, sweet innocence . . . even as she sets his blood on fire.

But they don’t belong in each other’s worlds anymore. There are too many mistakes. Too many secrets. Too many lies. All they have is that instinctive longing, that need—and something that looks dangerously like love. 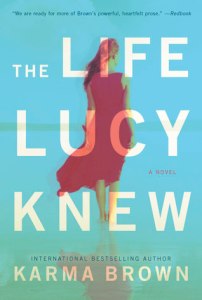 After hitting her head, Lucy Sparks awakens in the hospital to a shocking revelation: the man she’s known and loved for years-the man she recently married-is not actually her husband. In fact, they haven’t even spoken since their breakup four years earlier. The happily-ever-after she remembers in vivid detail-right down to the dress she wore to their wedding-is only one example of what her doctors call a false memory: recollections Lucy’s mind made up to fill in the blanks from the coma.

Her psychologist explains the condition as honest lying, because while Lucy’s memories are false, they still feel incredibly real. Now she has no idea which memories she can trust-a devastating experience not only for Lucy, but also for her family, friends and especially her devoted boyfriend, Matt, whom Lucy remembers merely as a work colleague.

When the life Lucy believes she had slams against the reality she’s been living for the past four years, she must make a difficult choice about which life she wants to lead, and who she really is.

Each generation, a competition is held to find the next empress of Honoku. The rules are simple. Survive the palace’s enchanted seasonal rooms. Conquer Winter, Spring, Summer, and Fall. Marry the prince. All are eligible to compete—all except yōkai, supernatural monsters and spirits whom the human emperor is determined to enslave and destroy.

Mari has spent a lifetime training to become empress. Winning should be easy. And it would be, if she weren’t hiding a dangerous secret. Mari is a yōkai with the ability to transform into a terrifying monster. If discovered, her life will be forfeit. As she struggles to keep her true identity hidden, Mari’s fate collides with that of Taro, the prince who has no desire to inherit the imperial throne, and Akira, a half-human, half-yōkai outcast.

Torn between duty and love, loyalty and betrayal, vengeance and forgiveness, the choices of Mari, Taro, and Akira will decide the fate of Honoku in this beautifully written, edge-of-your-seat YA fantasy.