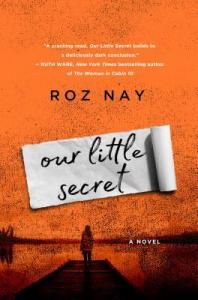 A police interview room is the last place Angela expected to find herself today. It’s been hours, and they keep asking her the same inane questions over and over. “How do you know the victim?” “What’s your relationship with Mr. Parker?” Her ex’s wife has gone missing, and anyone who was close to the couple is a suspect. Angela is tired of the bottomless questions and tired of the cold room that stays the same while a rotating litany of interrogators changes shifts around her. But when criminologist Novak takes over, she can tell he’s not like the others. He’s ready to listen, and she knows he’ll understand. When she tells him that her story begins a decade before, long before Saskia was in the picture, he gives her the floor.

A twenty-something young professional, Angela claims to have no involvement. How could she? It’s been years since she and H.P., Mr. Parker that is, were together. As her story unfolds, it deepens and darkens. There’s a lot to unpack… betrayal, jealousy, and a group of people who all have motives for retribution. If Angela is telling the truth, then who’s lying?

We can all remember the feeling of that first crush, the nervousness you felt when they entered a room, the awkward conversations, the sweaty palms…and that was just a crush in Middle School!  As we get older, those crushes grow more intense and eventually turn into that first all-consuming love.  The heart break that accompanies the break up is all consuming as well.  Until, of course, your best bestie pulls you out of your funk with movie marathons and pints of your favorite ice cream and you remember that you are a GODDESS, with a GODDESS best friend and you will survive!

Sadly, for Angela Petitjean, her best bestie was the very person that broke her heart.  With no back up friends to mend the remains of her shattered heart, she was forced to do so on her own.  Which may have been easier if she didn’t have to watch her first love fall in love with someone else.

But as the days went on, so did life and the two eventually found a way to repair some of what had been demolished between them.  Old habits die hard after all.  As the two old flames tried becoming new friends, it appeared that perhaps the happily married couple weren’t as picture perfect as they seemed, but things rarely are.

Just as HP and Angela seemed to be settling into a tolerable new normal, and she let her walls of heart break and betrayal begin to crumble, HP’s wife Saskia disappears. Has she left him and her domesticated life for the adventures she knew before she settled down?  Is there foul play involved in her disappearance? How can someone disappear without a trace?  These are the questions that Detective Novak intends to find answers to.  As he questions Angela, she reveals secrets to him about HP that lead to much a darker outcome than he ever expected.  What he comes to understand with absolute certainty is there is a fine line between love and obsession.

OUR LITTLE SECRET is a compelling read that consumes your emotions from beginning to end. Knowing full well there is a dark outcome waiting for you as you read, it is impossible not to fall in love with these characters as they fall in love with each other.  Even though you know they’re headed for disaster, you can’t help but get caught up in the hope of their young love.  Even as their relationship was careening to it’s inevitable end, I found myself rooting for a way out, a second chance, a change of heart.   I felt for these characters.

The characters were well developed and the timelines set so well that I often found myself forgetting the story was taking place during police interview.  Just as I would begin to lose myself in the story of Angela and HP’s past, a new piece of information would be subtly dropped and pull me out of my daze and back to the matter at hand, the missing woman and the circumstances surrounding her disappearance.  I found myself feeling guilty that I’d forgotten and angry at myself that I hadn’t been actively searching for clues to the mystery at hand. But just as quickly, I’d fall under the spell again.

I could not stop thinking about this book for days after I’d finished reading.  I was, for lack of a better word, obsessed. OUR LITTLE SECRET is a 3-star read that pairs well with Twisted Old Vine Red Zin and a pint of your favorite ice cream to remind you that you are a GODDESS and you did survive! Some may not be so lucky….

*Many thanks to the publisher for providing my copy.