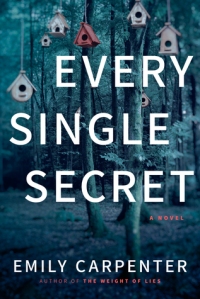 Emotionally guarded Daphne Amos always believed she’d found a kindred spirit in her fiancé, Heath. Both very private people, they’ve kept their pasts hidden from the world, and each other, until Heath’s escalating nightmares begin to put an undeniable strain on their relationship. Determined to give their impending marriage the best chance of succeeding, Heath insists that Daphne join him on a seven-day retreat with Dr. Matthew Cerny, a psychologist celebrated for getting to the root of repressed memories. Daphne reluctantly agrees—even though the past is the last place she wants to go.

The retreat’s isolated and forbidding location increases her unease, as do the doctor’s rules: they must relinquish their keys and phones, they’ll be monitored at all hours by hidden cameras, and they’re never to socialize with the other guests.

One sleepless night, Daphne decides to leave her room…and only then does she realize that the institute is not at all what it seems—and that whatever’s crying out from Heath’s past isn’t meant to be heard. It’s meant to be silenced.

***I’m thrilled to be including the book trailer for EVERY SINGLE SECRET on the blog today! Feel free to watch first and read my review second. ❤ ***

There are monsters all around us-people who have to hide because the world can’t bear to see them for who they truly are. They’re good at keeping secrets, the monsters. Sometimes, too good. Which is why I’ve always suspected that I am one of them.

Hold the phone and stop the press folks. There’s a new sheriff in town, and her name is Emily Carpenter. Ok, she is actually an author and not a sheriff, but minor details-amiright? She has officially passed the “Third Book Syndrome” test, which is a HUUUUUUUUGE accomplishment in my rating system. What is said “Third Book Syndrome” you ask? Let me break it down for you. It all begins with finding a brilliant debut author that you immediately connect with; one that writes about YOUR things and YOUR people and just really gets you. Then they publish their sophomore novel, and its really great too, so you fantasize about how you’ll buy their books for the rest of your life and maybe you’ll visit them on tour and then and so on. Then comes the dreaded THIRD BOOK. I say this because it’s usually this book that disappoints me the most. So many times I have reached book three and a real life WHOMP WHOMP WHOMP occurs. It doesn’t seem to discriminate between stand alone novels or installments of continuing series, but somehow this dreaded phenomenon seems to hit an author and drain the writing steam right out of them. I know that was a long way of just stating that this book passed the test and was awesome, but guys, it was such a relief to know I can keep Em on my auto-purchase list!

On to the actual book now. If you’ve read the author’s previous novels then you know that they have widely different plots and characters, but they all have a comforting, familiar style of writing. If you’re new to her books, fear not; you’re in for a treat! I like to say they satiate even the pickiest reading palate; while they have a challenging and intellectual feel to them, they are wholly compulsive and appeal to those wanting a suspenseful mystery focused around domestic drama. Every Single Secret is vastly different in terms of thematic elements, but it still has a dark, emotional pull to it. And one of the main characters name is Heath, which is my maiden name, so obviously it was destined to be a winning read.

At the beginning of the novel, we experience a brief “future” moment where a juicy secret is revealed, followed by being dropped into the present tense life of Daphne and Heath; they are practically perfect in every way, except for those pesky nightmares that Heath keeps having. They want to get those taken care of asap, but Daphne is hesitant when Heath proposes a retreat to the mountains with a counselor. Our cutesy couple consists of two people with dark, secret pasts, and this was never an issue because they agreed early on never to discuss them. New life, who dis? However, Heath decides he wants Daphne to know him fully, and when she doesn’t want to reciprocate, this is where the tension truly begins. The rest of the book is a nail-biting experience of this retreat with a few informative flashbacks into Daphne’s past. This made for a really exciting, fast-paced reading experience and I didn’t want to put the book down!

Per usual Emily, there’s no sacrificing meaty characters for exciting plot movement; you get it all in a one package deal. I find this is so rare in the books published today; whether it’s the author’s lack of ability to include both aspects in their title or simply a case of assuming most readers don’t care to have both, I’m not sure. All I know is I can’t slap 5 stars on any book that doesn’t include the set. Every Single Secret was likely the easiest 5 stars I’ve given this year, and I think it’s due to the author’s writing mantra of quality over everything else. If the quality is poor, no amount of flashy twists and shiny action scenes will win over the picky readers. If you’re a picky reader, listen up; I’m hollering at you. Read this book. Thank me later. You’re welcome. ❤

*Many thanks to the author for providing my copy via NetGalley.

10 thoughts on “Review: Every Single Secret”