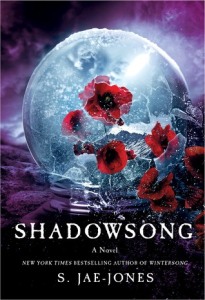 Six months after the end of Wintersong, Liesl is working toward furthering both her brother’s and her own musical careers. Although she is determined to look forward and not behind, life in the world above is not as easy as Liesl had hoped. Her younger brother Josef is cold, distant, and withdrawn, while Liesl can’t forget the austere young man she left beneath the earth, and the music he inspired in her.

When troubling signs arise that the barrier between worlds is crumbling, Liesl must return to the Underground to unravel the mystery of life, death, and the Goblin King—who he was, who he is, and who he will be. What will it take to break the old laws once and for all? What is the true meaning of sacrifice when the fate of the world—or the ones Liesl loves—is in her hands?

“I can only live, either altogether with you or not at all.”
–Ludwig Van Beethoven, The Immortal Beloved Letters

Whatever your opinion may be of this book, know that this is an honest review and in no way coerced as I wasn’t the biggest fan of Wintersong. Obviously it resonated with me enough, because I jumped on the chance to review an early copy of Shadowsong; looking back in hindsight I think most of my issues previously were due to the book being inappropriately marketed (at the time), therefore setting my expectations in a place they never should have been. I’m not going to rehash everything here, but if you’d like to catch up and read my thoughts on Wintersong, you can do so HERE. All that to say, my expectations were in exactly the right place for this installment; I was hungry for the author’s signature prose and romantic style of storytelling and that is exactly what I got.

They say the Hunt rides abroad when there is an imbalance between the Underground and the land of the living.

I had crossed the barrier between worlds, had walked away from the Goblin King and my vows last summer. Had my leaving caused a rip in the fabric of the world, allowing the spirits and ghouls and denizens of the Underground to escape? Was I in danger from the Wild Hunt?

It’s funny, because most of the issues I keep seeing people having with this book are the very ones I had with Wintersong. People seem to be expecting the sequel to be a little sexier, to feature Liesl and the Goblin King’s relationship in a little more of a, ehem, physical sense, but you won’t really find that here. In fact, the Goblin King is fairly absent for this novel; we don’t see or hear much from him until nearing the end of the book. This was a deal breaker for some, and I get it, but for me it wasn’t. I wasn’t invested in the physical part of this relationship post my reading of book one; this book, in my humble opinion, was about so much more. While you won’t find as much of the technical musical jargon here, you will find that same beautiful writing and heart-wrenching emotion as previously throughout. I was 100% invested in Liesl’s relationship with Joseph and this being the focus was a huge plus for me. There was a bit of intrigue and mystery sprinkled throughout which also pleased me greatly.

“Can our love persist otherwise than through sacrifices, than by not demanding everything?”
–Ludwig Van Beethoven, The Immortal Beloved Letters

Oh Lord. I’ve been sitting on this review for almost a week now because I cannot contemplate how to do Shadowsong justice. The ending is what has held me hostage; I cannot imagine how to discuss the final 50 pages of the book without spoiling it for you, so I just won’t. I will say that it is full of raw emotion, balancing both supernatural and human need, desire, and want on such a fine line that I found myself holding my breath until the very last page. It was completely unexpected for me, as I’m used to reading many mysteries that I have figured out early on, but I was wholly caught off guard by how Jae-Jones chose to close out this chapter of her writing career.

The Faithful are those who have been touched by the Underground, like you and me. Those with the Sight, or those who have escaped the clutches of the old laws. They are keepers of knowledge, and a family bound by belief, not blood.

I’m going to wrap this up, but I want to end by stating how glad I am that I went into this with an open mind. I truly believe that if I had gone into reading Wintersong free of expectations and assumptions that I would have enjoyed it just as thoroughly as I did Shadowsong. As I read I found myself wanting to copy down every single word as quotations for my review, but instead I find it easier to just shove the book at you and proclaim “Read it!” If you do decide to embark on this lovely and terrible journey, please make sure you start at the beginning with Wintersong, as these novels do need to be read in their proper order. Bravo Ms. S. Jae-Jones, and I look forward to more of your work!

*I think it’s worth noting that the author took it upon herself to include a note on trigger warnings for suicide in this book. I found this completely honorable and highly respect her for doing so!

**Many thanks to the publisher for providing my copy via NetGalley; it was a pleasure to provide my honest thoughts here.