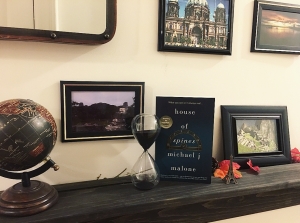 Ran McGhie’s world has been turned upside down. A young, lonely, and frustrated writer, and suffering from mental-health problems, he discovers that his long-dead mother was related to one of Glasgow’s oldest merchant families. Not only that, but Ran has inherited Newton Hall, a vast mansion that belonged to his great-uncle, who it seems has been watching from afar as his estranged great-nephew has grown up. Entering his new-found home, it seems Great-Uncle Fitzpatrick has turned it into a temple to the written word—the perfect place for poet Ran. But everything is not as it seems. As he explores the Hall’s endless corridors, Ran’s grasp on reality appears to be loosening. And then he comes across an ancient lift; and in that lift a mirror. And in the mirror . . . the reflection of a woman.

Michael J. Malone’s House of Spines is a poetically written gothic ghost story, weaving in family dynamics, tragedy, and some romance in between. The story starts off with 20-something year old Ranald McGhie meeting with his family attorney after his Great-Uncle, Alexander Fitzpatrick passes away and leaves his beautiful Victorian mansion to him, with the condition that the library stay in tact and the housekeeper and her husband maintain their own cottage on the property. Ranald is skeptical because his relationship with his Great-Uncle is non-existent, but little does he know, his uncle has been watching him from afar, proudly ready to hand the keys of the kingdom to Ran. Ran learns the hard way how family dynamics could get the worst of you when it comes to life and death. People can be brutal when it comes to money and inheritance, leaving the forces of human nature to take their victims unwillingly.

House of Spines was a very different read for me because it was a gothic-yet not scary, ghost story intertwined with real life issues that could affect anyone at any given moment. We all could either have experienced or know someone who has experienced family death, mental illness, sexual promiscuity, divorce, financial instability, and betrayal. Michael Malone beautifully blends these themes throughout the story without going overboard; allowing human nature to provide the outcomes to this conflicts. The writing style at some points tended to lull me or lose my focus, but the story really kept me focus on what was going to happen. It could be a bit of a slow-burn in terms of action, but I wouldn’t necessarily categorize this book as a slow burn because there was enough of the story to go around. With a unique story and very satisfying ending, I was very pleased to finish this novel and look forward to reading more from Mr. Malone.

Makani Young thought she’d left her dark past behind her in Hawaii, settling in with her grandmother in landlocked Nebraska. She’s found new friends and has even started to fall for mysterious outsider Ollie Larsson. But her past isn’t far behind.

Then, one by one, the students of Osborne Hugh begin to die in a series f gruesome murders, each with increasingly grotesque flair. As the terror grows closer and her feelings for Ollie intensify, Makani is forced to confront her own dark secrets.

There’s Someone Inside Your House by YA romance author Stephanie Perkins is a debut thriller that initially gives off Scream vibes from the initial synopsis. Makani Young is a student at Osbourne High School in rural Kansas, moving from Hawaii to live with her maternal grandmother as a vitriolic divorce battles between her parents rages on. The story starts off with the murder of one of Osbourne High School’s prized students, Haley Whitehall—crippling the town’s status quo and jumpstarting a new era of turmoil for this small town. One by one, Osbourne’s student body is slowly coming to the demise by a sadistic, yet savvy killer. Who’s the killer? Why is this person attacking “innocent” (wink wink) people, and how can it be stopped?

*breathes deeply* Welp. Alright guys and gals, this was bad. I guess this is what happens when you have an author switch genres from young adult romance to thriller slasher horror. It just doesn’t work for me and I’ll tell you why.

The Characters
The character development is lacking so hard in this book. We are introduced to Makani, her love interest Ollie, her grandmother, and her friends Darby and Alex. We are also introduced to a plethora of secondary characters who end up taking a more prominent role than a majority of the main deck of characters that Ms. Perkins provides for us. This tactic just doesn’t work for me because I really don’t care what a character we meet on one page does to affect the story. Why not divulge more into that/those character/s so I’m fully vested? It just doesn’t make sense that poorly discussed characters have too much power in this plot.

When we do learn more about the main characters, there really aren’t any personality traits or prominent portrayals about them either. You could literally take the person’s name and almost interchangeably use someone else and the story could go on.

The Story
I picked this book up expecting it to be nostalgic of 90s slasher films like Scream or I Know What You Did Last Summer (I was praying to my gay training guide that there’d be a Ryan Phillippe -esque character here but alas that was also not given to me with this story), but what I got was more Nickelodeon’s Degrassi. I feel like I was hoodwinked by the synopsis and the initial discussion about the book. This book is a romance novel with a minor slasher/whodunnit theme and don’t let anyone tell you otherwise.

What also lacked was minor secondary and tertiary plot developments in this book that really didn’t amount to anything of significance. We touch on Makani’s life before moving to Osbourne—yawn. We touch on Ollie’s relationship with his brother and family farm—ok, I guess. Why not further develop these sub-plots and loop them into the story?

What I did enjoy
The one and maybe only thing I really enjoyed about There’s Someone Inside Your House was that the characters were very diverse. This isn’t your #whitepeopleproblems story where everyone is blonde, blue-eyed, straight, white people drinking pumpkin spiced-lattes and listening to Taylor Swift. We see racially diverse people, lgbtq characters, and also hear the perspectives of those who are bullied, rather than the cheerleading squad or football quarterbacks complaining that they “can’t even”.

Final Thoughts
So now that I’ve complained and moaned with this review, I do believe that people who enjoy romance novels and young adult novels shouldn’t be deterred by this review. In fact, I encourage you to pick this one up if those genres interest you because There’s Someone Inside Your House is a spot-on choice for those seeking teen romance reads with something a little more complicated.