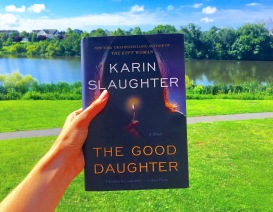 Two girls are forced into the woods at gunpoint. One runs for her life. One is left behind…

Twenty-eight years ago, Charlotte and Samantha Quinn’s happy small-town family life was torn apart by a terrifying attack on their family home. It left their mother dead. It left their father — Pikeville’s notorious defense attorney — devastated. And it left the family fractured beyond repair, consumed by secrets from that terrible night.

Twenty-eight years later, and Charlie has followed in her father’s footsteps to become a lawyer herself — the ideal good daughter. But when violence comes to Pikeville again — and a shocking tragedy leaves the whole town traumatized — Charlie is plunged into a nightmare. Not only is she the first witness on the scene, but it’s a case that unleashes the terrible memories she’s spent so long trying to suppress. Because the shocking truth about the crime that destroyed her family nearly thirty years ago won’t stay buried forever…

Anyone who knows me well knows that I’m a Grade-A, Karin Slaughter junkie. I can’t get enough of her stuff; it’s like crack for nerds who like all the dark things in their reading repertoire. I began devouring her books right around my 18th birthday and have continued to do so for almost 10 years. She’s the only living author that I have continued to read for such an extended period of time; I tell you all this so that you are aware just how good these books truly are. I’m going to keep my review spoiler free for The Good Daughter, but the following paragraphs will have some spoilers for her previous series, mainly the Grant County books. If you haven’t read them and are planning to, or if you’d rather skip the backstory, I’d recommend skipping the section between the stars.

If I may I would like to share my journey (so far) with Karin Slaughter, as I have had so many people ask me on Goodreads why I am obsessed with her books and how I fell in to reading them.  I was lucky enough to grow up with an aunt who’s a librarian in Georgia and has continually connected me with authors she knew are just phenomenal. She was the first person who understood my need for consuming mysteries, thrillers, and all-around dark themed novels; the fact that I was able to pick up Blindsighted right as my mother was going through a scary breast cancer diagnosis and treatment was not lost on me. The Grant County series wasn’t just another set of books to teenage Chelsea; they were a “real” place that I could escape to when my mom’s tumors were being cut out of her body or while the chemo ravaged her body. I could go someplace else where all that wasn’t happening, but also where these people understood darkness, suffering, and pain. This is why I think it’s so important that people write books containing such dark content.

I blew threw the Grant County series; I literally read them all back to back and couldn’t get enough. I grew up in Atlanta and went to Auburn University, so if there has been a more relatable series written for myself I can’t think of what it might be. When I turned the last page of Beyond Reach and I saw what Slaughter had done, I’ll be honest, I was ready to rage and rant and throw books and cuss people out. HOW COULD YOU KILL MY BELOVED?!?!?!?! When I was ready to make the transition into the Will Trent series, I thought I would be done. No way could this woman make me love another man with Sarah. How dare she? I’ll admit, it took me a bit of warming up to Will but then it hit me; the reason I had so many feelings about these books was due to the dang characters! Finally, I blew threw the remaining Will Trent novels with ease and care for this new family I’d accumulated. I also loved her standalone novels of late and thought they were a fantastic way for new fans to dip their toes in the great expanse of the Slaughter kingdom. So that brings us up to speed for The Good Daughter.

If I’m being honest, it’s always nerve wracking to pick up a new book by your favorite author, especially once they’ve been writing long term. What if it isn’t as good as those before? It’s a real fear; so many authors burn out or try to keep writing the same story over and over while losing their viewers. That fear was unnecessary here; you heard me, this one gets Chelsea’s “Holy Guacamole” stamp of approval! Being another standalone, I wasn’t really sure what the feel would be here, as each of her solitary novels are all quite different. Cop Town had the feel of historical crime fiction that was heavily character driven and tied in to the past of some familiar previous characters, while Pretty Girls was a highly disturbing thriller wrought with tension and graphic content. I believe the reason I was so drawn in by The Good Daughter was due to the nostalgic vibe it gave off.

As a massive Grant County fan I was delighted to discover that TGD had such similar structure to Grant County and it’s characters while simultaneously establishing it’s own groove. We are presented with an estranged couple we desire to reconcile set in a small town off of Atlanta with major drama that is kept within that close circle. I did really enjoy that we were able to follow a family of lawyers this time; it gave a fresh spin on the procedural formula that seems to work so well for the author. This story did have a little more action than some in the past, but as we all know the reason to read any book by KS is due to her master characterization skills. The lady can write some relatable, intriguing, and empathetic characters! Once again, this aspect was portrayed at it’s best and I can’t applaud how well the different personalities shined through in the writing.

Speaking of, THIS is how you develop the people telling your story. THIS is how you write inclusive, diverse crime fiction. THIS is how you incorporate graphic content in a respectful manner that furthers the story and emotionally ties the reader to the characters. There was no awkward writing in of a few diverse characters to cover the writer’s backside. Characters covering various forms of minorities are present here, but it’s done so in a way that feels right. It feels like real life and what we all desire from mainstream fiction. Tough, timely issues are covered here, such as the life of a transgender woman in the deep south, the using and abuse of a child with diminished mental capacities, and the long, seemingly impossible journey to healing and restoration after such a brutal incident as described in the prologue were all just pieces of what made this book such a strong contender for my Top 10 reads of 2017.

I’ll shut up now, as I’ve done enough damage, but my hope is that you’ll give this book a chance, even if it doesn’t sound like your typical read. To answer many folks question, I felt this one wasn’t quite as gratuitously graphic and violent as Pretty Girls, but it definitely is founded on a highly disturbing, brutal attack. Highly recommended to anyone who enjoys a procedural that makes you feel things that we, as humans, should never grow numb to. I apologize for the lengthy review and hope you enjoy this read as much as I did. You won’t find characters written quite like this anywhere else.

*Many thanks to the publisher for providing my copy; it was a pleasure to provide my honest thoughts here.

31 thoughts on “Review: The Good Daughter”