It’s that time of the season where I’m desperately begging you guys to hold me accountable in two things: narrowing down my TBR and determining which books should stay or be purged from the list. I recently went through and amended my Goodreads TBR to only include review copies so that I could keep them organized; this is how I determined now is the best time to, little by little, go through and seriously consider which pleasure books should be boosted in priority and which should get the boot. I’d love it if you could help me out in the comments; if you have a favorite book you see in these posts, could you let me know? Also, if you see a book that really didn’t sit well with you, could you let me know that too? Of course everyone’s opinions are subjective, but I’m hoping mostly that this will help encourage me to pick up at least one book from each stack that has been sitting and get that sucker read! Here’s how I picked this stack: I led my 4 year old to one of my bookshelves and told her to pick the 5 prettiest books that she saw. 🙂 I’ll be including the book summaries below in case anyone spies a book that might interest them to; thanks for your help guys and I’ll post updates as I get through these! ❤ 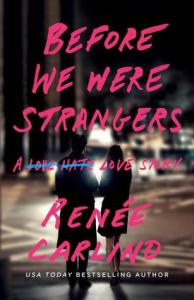 BEFORE WE WERE STRANGERS
BY RENEE CARLINO

To the Green-eyed Lovebird:

We met fifteen years ago, almost to the day, when I moved my stuff into the NYU dorm room next to yours at Senior House.

You called us fast friends. I like to think it was more.

We lived on nothing but the excitement of finding ourselves through music (you were obsessed with Jeff Buckley), photography (I couldn’t stop taking pictures of you), hanging out in Washington Square Park, and all the weird things we did to make money. I learned more about myself that year than any other.

Yet, somehow, it all fell apart. We lost touch the summer after graduation when I went to South America to work for National Geographic. When I came back, you were gone. A part of me still wonders if I pushed you too hard after the wedding…

I didn’t see you again until a month ago. It was a Wednesday. You were rocking back on your heels, balancing on that thick yellow line that runs along the subway platform, waiting for the F train. I didn’t know it was you until it was too late, and then you were gone. Again. You said my name; I saw it on your lips. I tried to will the train to stop, just so I could say hello.

After seeing you, all of the youthful feelings and memories came flooding back to me, and now I’ve spent the better part of a month wondering what your life is like. I might be totally out of my mind, but would you like to get a drink with me and catch up on the last decade and a half?

Sixteen-year-old Cinder is considered a technological mistake by most of society and a burden by her stepmother. Being cyborg does have its benefits, though: Cinder’s brain interference has given her an uncanny ability to fix things (robots, hovers, her own malfunctioning parts), making her the best mechanic in New Beijing. This reputation brings Prince Kai himself to her weekly market booth, needing her to repair a broken android before the annual ball. He jokingly calls it “a matter of national security,” but Cinder suspects it’s more serious than he’s letting on.

Although eager to impress the prince, Cinder’s intentions are derailed when her younger stepsister, and only human friend, is infected with the fatal plague that’s been devastating Earth for a decade. Blaming Cinder for her daughter’s illness, Cinder’s stepmother volunteers her body for plague research, an “honor” that no one has survived.

But it doesn’t take long for the scientists to discover something unusual about their new guinea pig. Something others would kill for.

THE NAMES THEY GAVE US
EMERY LORD

Everything is going right for Lucy Hansson, until her mom’s cancer reappears. Just like that, Lucy breaks with all the constants in her life: her do-good boyfriend, her steady faith, even her longtime summer church camp job.

Instead, Lucy lands at a camp for kids who have been through tough times. As a counselor, Lucy is in over her head and longs to be with her parents across the lake. But that’s before she gets to know her coworkers, who are as loving and unafraid as she so desperately wants to be.

It’s not just new friends that Lucy discovers at camp—more than one old secret is revealed along the way. In fact, maybe there’s much more to her family and her faith than Lucy ever realized.

The year is 2059. Nineteen-year-old Paige Mahoney is working in the criminal underworld of Scion London, based at Seven Dials, employed by a man named Jaxon Hall. Her job: to scout for information by breaking into people’s minds. For Paige is a dreamwalker, a clairvoyant and, in the world of Scion, she commits treason simply by breathing.

It is raining the day her life changes for ever. Attacked, drugged and kidnapped, Paige is transported to Oxford – a city kept secret for two hundred years, controlled by a powerful, otherworldly race. Paige is assigned to Warden, a Rephaite with mysterious motives. He is her master. Her trainer. Her natural enemy. But if Paige wants to regain her freedom she must allow herself to be nurtured in this prison where she is meant to die.

When a man fails in his attempt to murder his wife and then commit suicide, DC Maggie Neville is assigned to be the surviving woman’s Family Liaison Officer.

As the husband lies in a coma in hospital, the wife sets about making sure everyone knows he’s guilty. But there’s something about her story that doesn’t ring true to Maggie.

Digging deeper, she finds an unexpected link between the couple’s case and a series of burglaries she and her colleagues are investigating in the local area – and the mysterious disappearance of a young woman twenty years ago.

*Don’t forget to leave you thoughts below! ❤