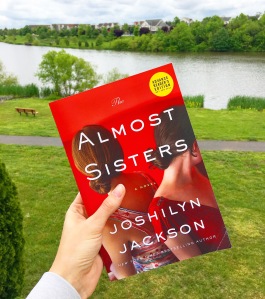 Superheroes have always been Leia Birch Briggs’ weakness. One tequila-soaked night at a comics convention, the usually level-headed graphic novelist is swept off her barstool by a handsome and anonymous Batman.

It turns out the caped crusader has left her with more than just a nice, fuzzy memory. She’s having a baby boy–an unexpected but not unhappy development in the thirty-eight year-old’s life. But before Leia can break the news of her impending single-motherhood (including the fact that her baby is biracial) to her conventional, Southern family, her step-sister Rachel’s marriage implodes. Worse, she learns her beloved ninety-year-old grandmother, Birchie, is losing her mind, and she’s been hiding her dementia with the help of Wattie, her best friend since girlhood.

Leia returns to Alabama to put her grandmother’s affairs in order, clean out the big Victorian that has been in the Birch family for generations, and tell her family that she’s pregnant. Yet just when Leia thinks she’s got it all under control, she learns that illness is not the only thing Birchie’s been hiding. Tucked in the attic is a dangerous secret with roots that reach all the way back to the Civil War. Its exposure threatens the family’s freedom and future, and it will change everything about how Leia sees herself and her sister, her son and his missing father, and the world she thinks she knows.

I swear, every time I pick up a book written by Joshilyn Jackson I say it’s the best she’s ever written and she cannot possibly top it, but every time I’m wrong. I had a feeling before ever cracking the spine (just kidding, I’m not a monster to my books) that this one was special. Sure, the cover is gorgeous and swoon worthy and the blurb on the back was just the right amount of intrigue and feels, but my intuition was telling me that there was something deeper here, something more complex to the plot than portrayed in the description. I think all readers can relate to that feeling on occasion; it seems to be the holy grail of the reading experience and we try to capture that experience as often as possible to contain that wholly satisfied feeling.

As a caucasian female born and raised in the deep south, it’s safe to say I’m a part of the target market for Jackson’s books. This book in particular really spoke to my roots, as I was born in Alabama, raised in Atlanta, Georgia, and have recently moved to Northern Virginia; with two of these states being featured in The Almost Sisters I was completely at ease. While I won’t be getting into detailed plot specifics, I could feel early on that the author chose to focus on a timely issue that I have struggled with for years-the dual nature of the southern states and how that nature affects minorities. In this book, the focus is on the black community and how, even though the years of legal slavery have passed, racism is still alive and well. Perhaps this is why the book resonated with me in such a complete fashion, but my entire life I have witnessed the two very distinct natures of the south. On one hand, it can be welcoming, hospitable, and comforting; I’ve experienced firsthand the warm love and support that a southern neighbor, friend, or family member can provide. On the other hand, underhand racism, as well as blatant racism, is still causing hurt and hatred to thrive in a time where we feel we’ve progressed profoundly. I can’t do it justice in my review, but the narrative created by Joshilyn Jackson is indeed profound, moving, and convicting.

Prejudices are dissected in many forms along the journey; while there are many various appearances of racial discord, past and present tense, there are also situations involving the competitive nature of the step sisters, along with Leia being an unwed mother of a bi-racial baby while coming from a traditional, southern family. I found myself particularly moved by the plot line involving Birchie, Wattie, and “the secret”. I would say the pacing was very steady, one that you would want to take your time through and soak up every detail (it’s the southern way, after all). If you enjoy southern fiction that is well done and so much more than shallow cliches, I would HIGHLY recommend picking up The Almost Sisters. I think fans of the author will agree that this is her best work to date, although I’m equally sure I’ll be eating crow by the time her next novel is published.

*Many thanks to the publisher for providing my copy; it was a pleasure to provide my honest thoughts here and participate with the SHE READS BOOK CLUB summer session.

13 thoughts on “Review: The Almost Sisters”