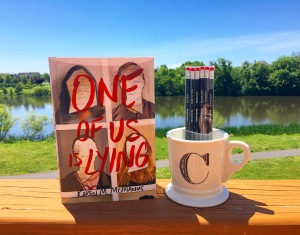 Pay close attention and you might solve this.
On Monday afternoon, five students at Bayview High walk into detention.
Bronwyn, the brain, is Yale-bound and never breaks a rule.
Addy, the beauty, is the picture-perfect homecoming princess.
Nate, the criminal, is already on probation for dealing.
Cooper, the athlete, is the all-star baseball pitcher.
And Simon, the outcast, is the creator of Bayview High’s notorious gossip app.

Only, Simon never makes it out of that classroom. Before the end of detention Simon’s dead. And according to investigators, his death wasn’t an accident. On Monday, he died. But on Tuesday, he’d planned to post juicy reveals about all four of his high-profile classmates, which makes all four of them suspects in his murder. Or are they the perfect patsies for a killer who’s still on the loose?

Everyone has secrets, right? What really matters is how far you would go to protect them.

What a marvelous, delectable read! There was something so addictive about this book; it felt at times distinctly young adult while also having moments that felt so well done it was beyond the stereotype of what a teenage thriller tends to be. It’s taken me 4 days just to collect my thoughts to the point that I can attempt writing a proper review, and I’m certain this will be one of the most talked about books in the YA genre this Spring/Summer season. My issues with this book were minor, and I’ll get to those later, but when I first picked up this book I knew I would enjoy it based on the description stating “Breakfast Club meets Pretty Little Liars”, two things I love to pieces. While this was in some ways a traditional whodunnit, I believe many of the minor influences were the reason this novel reads so well.

According the the books I’ve logged on Goodreads, I’ve managed to read over 700 mystery, thriller, and suspense novels. That is an overwhelming number of books that tend to be fiercely judged on their ability to provide a solid, mind-blowing twist. The reason I mention this is due to the fact that it is very difficult for me to pick up a mystery and not have it solved in the first 10% if the clues are provided; otherwise, I typically pick it up when said character is first introduced into the narrative. One Of Us Is Lying is bound to be one of many fabulous novels that gets thrown into that category and is scrutinized solely by it’s ability to keep the reader guessing “whodunnit” until the big reveal. Again, I mention this because I think it would be a grave mistake for the reader to be so focused on this aspect when the book has so much more to offer! Personally, I had it figured out in the first chapter. As stated in the summary, the pieces are there for the reader to put together if they are clever enough. I applaud the author for her cleverness and storytelling abilities; there will be many readers who will be fooled by the red herrings and receive that glorious AHA moment at the big reveal. Why am I rambling on about this you ask? I really want to drive home the point of what makes this book stand out from others that are similar.

The Characters. It is a rare day indeed that I find fleshed out, grounded, relatable characters that draw me in to a young adult narrative the way that these did here. My AHA moment may not have come during the big twist, but it certainly came in waves abounding throughout my experience journeying with these various high school kids. I was sure this would be another read with those stereotypical teenagers that give contemporary YA novels a bad rep; for crying out loud the stereotypes are printed on the inside of the book cover in the description! I think this was a clever move by the publisher and author; if other readers pull the same underestimation as I did, they will be more than pleasantly surprised at what they get out of this book. In referral to the wrapping up of characters and not the twist, the ending was one of the best I’ve seen in awhile. There is no gag worthy happily ever after where everyone is perfectly paired up in couples and they ride off into the sunset on their baby unicorns while the sun beats down on their pimple free faces…. No, while there are some upbeats moments, the ending is messy and real and I welcomed it whole heartedly. People made mistakes beyond the central narrative and there were consequences and some things were left open-ended in the way that makes you wonder what their eventual decisions lead to. I’m extremely pleased that the author chose to take some risky leeway with her writing direction and applaud her with a standing ovation.

Alright, I said I would get to the minor issues and I kind of lied. Please don’t hate me, but there was a tiny aspect of this book that I thought I could get past, and even though I can’t discuss it outright (because these spoilers involve blowing the entire plot of the book), my conscience just wouldn’t let me finish this review without mentioning them in the broadest of terms. Again, I applaud the author for tackling some really tough issues and concerns in this book, and I don’t think she wrote anything wrong on her end. I think it’s more of an issue I’ve seen present itself across a wide number of YA books recently. Some who may be dealing with mental illness may perceive the outcome of this novel in an unrealistic way and I can see the possibility of various readers being split on their opinions of some of the content presented. I will say, I feel it was handled better in this book than in others I have read previously. As always, if you’ve read this book early or once you have a chance to read it and would like to discuss, please feel free to private message me and I’ll gladly have a respectful chat with you.

This is a review I’ve been struggling to write for a few days now and I hope I’ve done it justice. There just aren’t words to describe how completely readable this book really is. McManus did such a fabulous job of making me just as interested in the individual secrets and side stories of the “Murder Club” as I was in the central mystery surrounding Simon’s death. The author had me convinced that this couldn’t possibly be her debut novel, and if this is what she has published first, I can only imagine the treats we will receive in written form from her down the road. I’m a committed fan now and I can’t wait to see what she publishes next. Highly recommended to teens, sure, but I think loads of adults are going to enjoy this one as well. There’s something really special and unique to this story that defies the boundaries of age gaps and will have me remembering it for months to come.

*Many thanks to the publisher for providing my copy; it was a pleasure to post my honest thoughts here. 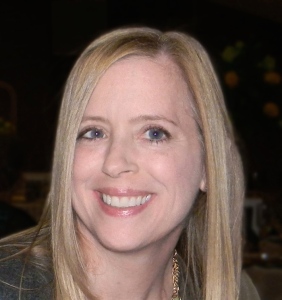 Karen M. McManus earned her BA in English from the College of the Holy Cross and her MA in journalism from Northeastern University. Her debut young adult novel, ONE OF US IS LYING, will be released from Delacorte Press/Random House on May 30, 2017. It will also be published internationally in 18 territories including the United Kingdom, Australia, Germany, France, Spain, Italy, etc. To learn more visit www.karenmcmanus.com, or follow @writerkmc on Twitter.