Haunted by the disappearance of his mother when he was eight years old, detective Hud Matthews begins his own investigation to find out what really happened so many years before. When a rare murder occurs in the lakeside community, Hud’s veteran skills are called upon to capture the killer. Pulled deep into the threads of the community with ties to the past, Hud quickly becomes a target, not only of the killer, but of those who wish the past to be left alone. As Hud gets closer to discovering the truth about the crimes, he has to face a choice of enforcing the law, or stepping outside of it to make sure that his version of justice is served.

When I was a kid, I had a friend whose family had a lake house. It was a beautiful home in Delevan, Wisconsin that sat on a hill with the lake just out the back door and down the gorgeous stone steps. I loved going there for weekends in the summer and spending the entire day in the sun, and then sleeping in with all the windows wide open so the cool lake breeze could lull you to sleep. The days seemed endless and perfect. I was always so enamored with the idea that my friend got to live a sort of double life; the one she had during the school year; and the one she had during the summer. She had a whole other group of friends at the lake. I always wondered what it was like for the folks that lived there year round. Did they look forward to the summer, to reuniting with their seasonal friends? Or was it hard to have your life disrupted by a surge of people that infiltrated your town and your life for a few months every year. I was always intrigued by that dynamic.

Hud Matthews grew up as a year round kid, in a picturesque lake town that attracted summer dwellers each year. Families rented cabins on the lake and enjoyed the long days, warm sun and time away from their real life. Hud worked in his family’s souvenir shop, which catered to the tourist and kept him busy. At the age of 8, Hud didn’t have a care in the world and his mother, who loved him dearly, seemed as happy as he had ever known her to be. So, when she waved goodbye and got into a black car smiling and eager, he didn’t think twice. He never could have predicted that that would be the last time he’d ever see her.

Days turned into weeks, weeks turned into months, and months turned into years. In that time, Hud searched. He searched for his mother, he searched for clues, he searched for answers, but he found nothing. After a decade of dead ends and silence, he left his lakeside town in hopes of starting over. It worked, for a while, but the past always seemed to be lurking in the shadows. The unanswered questions of his youth still echoing in his mind only grew louder after Hud became a police officer. His nature was to question, to uncover the truth and punish the guilty, something he longed to do for the sake of his mother. In the end, Hud had no choice but to return home.

In his absence, the town he grew up in had changed from an idyllic summer getaway to a forgotten, run down memory. A dead body in the lake marked Hud’s homecoming, that of a young woman who had been murdered, an ominous sign of what was to come. The events that followed led Hud down a path he never expected, a path that had existed all his life, hiding in plain sight.

WHERE I CAN SEE YOU takes place in a once gorgeous and thriving, now dismal lakeside town that sets the stage for this chilling read. Throughout the book, the setting was so intricately described I could feel the eerie chill coming off the lake. The darkness of the setting lends beautifully to the building suspense that keeps the reader on edge throughout the book.

The story is told by jumping back and forth between Hud being questioned by a detective, and Hud’s narration of the events as they unfolded. This reminded me strongly of one of my all time FAVORITE reads, William Landay’s
Defending Jacob. Mr. Sweazy did a nice job with his rendition of this side-by-side story telling from the main character’s point of view. I was constantly trying to piece together clues from each narrative in hopes of figuring out who the culprit was, and if the crimes of the past were related to those of the present.

I give WHERE I CAN SEE YOU 4 stars. It’s a quick read with plenty of dark twisty suspense and an ending that leaves you wanting more. It pairs well with Shannon Ridge Petite Syrah and a warm summer night.

*Many thanks to the publisher for providing my copy; it was a pleasure to provide my honest thoughts here on the blog. 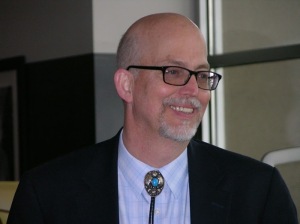 ABOUT THE AUTHOR:
Larry D. Sweazy (pronounced: Swayzee) is the author of thirteen novels: WHERE I CAN SEE YOU, the Marjorie Trumaine Mystery series (SEE ALSO MURDER, SEE ALSO DECEPTION), A THOUSAND FALLING CROWS, the Lucas Fume Western series (VENGEANCE AT SUNDOWN, ESCAPE TO HANGTOWN), the Josiah Wolfe, Texas Ranger series (THE RATTLESNAKE SEASON, THE SCORPION TRAIL, THE BADGER’S REVENGE, THE COUGAR’S PREY, THE COYOTE TRACKER, THE GILA WARS–Berkley), and THE DEVIL’S BONES (Five Star). He won the WWA Spur award for Best Short Fiction in 2005 and for Best Paperback Original in 2013, and the 2011 and 2012 Will Rogers Medallion Award for Western Fiction for books the Josiah Wolfe series. He was nominated for a Derringer award in 2007, and was a finalist in the Best Books of Indiana literary competition in 2010, and won in 2011 for THE SCORPION TRAIL. And in 2013, Larry received the inaugural Elmer Kelton Fiction Book of the Year for THE COYOTE TRACKER, presented by the Academy of Western Artists. Larry has published over sixty nonfiction articles and short stories, which have appeared in ELLERY QUEEN’S MYSTERY MAGAZINE; THE ADVENTURE OF THE MISSING DETECTIVE: AND 25 OF THE YEAR’S FINEST CRIME AND MYSTERY STORIES!; BOYS’ LIFE; HARDBOILED; Amazon Shorts, and several other publications and anthologies. He lives in the Midwest with his wife, Rose.

7 thoughts on “Review: Where I Can See You”