I am so excited to bring you my very first Mini Review Monday! As I said in last week’s wrap-up, I would eventually love for this to be a weekly feature, but I’m just hoping to get the ball rolling while I catch up on higher priority ARCs in an attempt to clear room for more of these posts. The idea is to include 3 books with reviews of roughly 4-8 sentences giving a base gist of my feelings and opinions of said books. These will be either unsolicited review copies (sometimes I like to refer to them as surprise book mail) or books I’ve had on my personal TBR that I’m wanting to throw into the rotation. Please bear with me as I tweak the formatting and style; hopefully this will settle rather quickly and I’ll have a basic template to go with. This week I’ve chosen 3 books to include; 1 surprise book mail, 1 Goodreads Giveaway win, and 1 fun read. Enjoy! 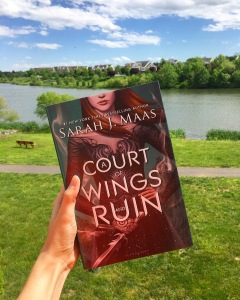 Feyre has returned to the Spring Court, determined to gather information on Tamlin’s maneuverings and the invading king threatening to bring Prythian to its knees. But to do so she must play a deadly game of deceit-and one slip may spell doom not only for Feyre, but for her world as well.

As war bears down upon them all, Feyre must decide who to trust amongst the dazzling and lethal High Lords-and hunt for allies in unexpected places.

*Minor spoilers below for those who haven’t read the first two books!*

WOW. Sarah J Maas has quickly become one of my favorite Young Adult authors, and for good reason. There is massive division on opinions surrounding her books, but I can’t remember such hype around a series since Harry Potter was first introduced to us. Clearly I can touch on nothing regarding the plot, but just know that if you’re a fan, there are lots of twists and turns revealed in this one. I was delighted that so many of my long remaining questions were answered and felt she handled the closing on Feyre and Rhysand’s chapter of Prythian well. I don’t have words for the emotions I’ve felt throughout the series, but I’m so glad that I found these books when I did; I needed a full on escape from life and there was no better series I could have found to provide me with that. Highly recommended for readers looking for fantastical adventure, just make sure and read the rest of the series first if you’re new!

*Note to parents- this series is rather mature and I feel improperly marketed to a younger crowd than appropriate. Please use your judgement on whether you feel your teen is ready for this type of material. 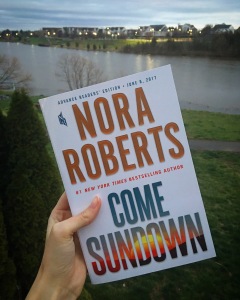 The Bodine ranch and resort in western Montana is a family business, an idyllic spot for vacationers. A little over thirty thousand acres and home to four generations, it’s kept running by Bodine Longbow with the help of a large staff, including new hire Callen Skinner. There was another member of the family once: Bodine’s aunt, Alice, who ran off before Bodine was born. She never returned, and the Longbows don’t talk about her much. The younger ones, who never met her, quietly presume she’s dead. But she isn’t. She is not far away, part of a new family, one she never chose—and her mind has been shattered…

When a bartender leaves the resort late one night, and Bo and Cal discover her battered body in the snow, it’s the first sign that danger lurks in the mountains that surround them. The police suspect Cal, but Bo finds herself trusting him—and turning to him as another woman is murdered and the Longbows are stunned by Alice’s sudden reappearance. The twisted story she has to tell about the past—and the threat that follows in her wake—will test the bonds of this strong family, and thrust Bodine into a darkness she could never have imagined.

I finally popped my Nora Roberts cherry! 🙂 I’m not sure why it’s taken me so many years to pick up one of her books, but I’m sure glad I won this one, otherwise I may never have gotten around to reading it. Come Sundown is a perfect way to ease into her books; it’s a standalone, so no worrying about committing to a series with 92 entries to date, and it is completely captivating with a quick pace alongside a dark, mysterious overtone. The thing that sets this book apart from others of romantic suspense was the life she breaths into these deep, realistic characters. Roberts clearly knows how to produce a novel that is full of everything you want in domestic suspense, but her seedy characters are what stole the show in my humble opinion. There were a few spots that felt a little fluffed up and I felt maybe 50 pages or so could have been shaved off, but otherwise this was a near perfect read. Highly recommended for fans of romantic suspense that don’t want to sacrifice on characterization!

*Many thanks to the publisher for providing my copy via Goodreads Giveaway! 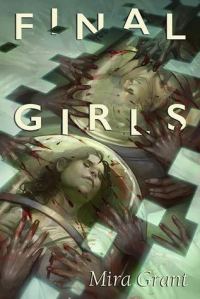 What if you could fix the worst parts of yourself by confronting your worst fears?

Dr. Jennifer Webb has invented proprietary virtual reality technology that purports to heal psychological wounds by running clients through scenarios straight out of horror movies and nightmares. In a carefully controlled environment, with a medical cocktail running through their veins, sisters might develop a bond they’ve been missing their whole lives—while running from the bogeyman through a simulated forest. But…can real change come so easily?

Esther Hoffman doubts it. Esther has spent her entire journalism career debunking pseudoscience, after phony regression therapy ruined her father’s life. She’s determined to unearth the truth about Dr. Webb’s budding company. Dr. Webb’s willing to let her, of course, for reasons of her own. What better advertisement could she get than that of a convinced skeptic? But Esther’s not the only one curious about how this technology works. Enter real-world threats just as frightening as those created in the lab. Dr. Webb and Esther are at odds, but they may also be each other’s only hope of survival.

Recently Mr. Humphrey and I watched an episode of Black Mirror where a man volunteered to be a test subject for a video game that supposedly was a realistic way of being inside the game itself. The idea was to see how long each player lasted, as the game fed on your imagination and brought your worst nightmares to life. Final Girls was based on a similar premise that I felt was a better version of that show. I really enjoyed reading this novella, so much in fact that I wish it had been longer than 112 pages. The journalist POV was an excellent choice to add a realistic sense to the plot, and I think it gave the characters a bit of humanity as well. The ending was a little cheesy, but overall I was completely engrossed and basically held my breath as I raced through the story in one sitting. I easily could have read a full sized book on the subject and found myself simultaneously obsessed and disgusted. Highly recommended for fans of lighter horror and all kinds of deliciously weird writing.

*Many thanks to the publisher for providing my copy via NetGalley.

**You may also know Mira Grant from her writing as Seanan McGuire, author of the Wayward Children series.

That’s it for this week! Has anyone read any of these yet? If so, what are your thoughts? Thanks for reading; next week I’m hoping to include mini reviews of Beartown by Fredrick Backman, The Secrets You Keep by Kate White, and One True Loves by Taylor Jenkins Reid, so feel free to check in. ❤