Skip to content
December 30, 2016 The Suspense Is Thrilling Me 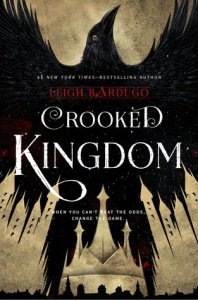 When you can’t beat the odds, change the game.

Kaz Brekker and his crew have just pulled off a heist so daring even they didn’t think they’d survive. But instead of divvying up a fat reward, they’re right back to fighting for their lives. Double-crossed and badly weakened, the crew is low on resources, allies, and hope. As powerful forces from around the world descend on Ketterdam to root out the secrets of the dangerous drug known as jurda parem, old rivals and new enemies emerge to challenge Kaz’s cunning and test the team’s fragile loyalties. A war will be waged on the city’s dark and twisting streets―a battle for revenge and redemption that will decide the fate of the Grisha world.

Wah… Once again I’m at the end of the road with a bunch of pals I hate to see go. Honestly, I didn’t have high expectations for Six of Crows before starting it; I’ve learned over the past few years that most books being overly hyped tend to let me down, so I adjusted my expectations and decided to read it just to say I had. I was wrong about this one. If I had read Bardugo’s Grisha trilogy first, I probably would have gotten through it more quickly, but since I hadn’t I had to go slowly and get straight all the details of this mesmerizing fantasy world the author has created. I knew ahead of time that she planned to only write two books in this set, and for some reason I was ok with that until I reached the end of Crooked Kingdom and wanted to throw my book across the room because WHY DID YOU DO THIS TO ME BARDUGO?!

I was extremely pleased with the way LB decided to split these books up; she left us wanting more and kept us hooked by the end of book one without making it such a jagged cliffhanger that we wanted to start a riot. (Or maybe I should just speak for myself.) The depth of these characters are something I haven’t seen in most YA I’ve read; the quality of writing is high and these books aren’t just trashy fluff produced to “keep teens in the library and off the street”. We have the chance to go on a real adventure, the kind our old time fairy tales are made of, and while there are snippets of romance along the way, they are by no means the central focus of the book and are actually quite subtle and clean. Each relationship, whether romantic or platonic, is written with such care and precision; it’s like the cast comes off paper and becomes a part of your life, walking around in your head with you as you go about your daily activities.

Speaking of, Jesper is STILL my favorite character; he’s mine and you can’t have him. The development in his story was by far the most complex and his personality and sense of humor are divine. I love how diverse all the characters are without being in your face; everyone seems normal and accepted for who they are as opposed to LOOK AT ME I’M INCLUDING ALL RACES AND GENDERS AND SEXUALITY AND DISABILITIES AND I’M SUPER ACCEPTING AND INCLUSIVE DAGGIT! I’m still a little sore about the ending; I can’t believe we lost someone that valuable and my little heart is still shattered. I wasn’t quite sure what to make of the ending; was she letting us use our imagination of how things will go on or leaving a window open for new material perhaps? Either way, I think it’s fair to say these books are some of the best around and if you don’t think so you’re wrong. If you haven’t started these yet, don’t make the mistake of buying or checking out the ebook. The physical copies are gorgeous; the dip-dyed edges, blacked out pages, and stunning cover art are well worth holding and enjoying. If you can’t afford to purchase them then check them out at the library. Highly recommended for fans of adventure and amazing books. Well worth your time invested!

* If you missed my review of Six of Crows initially, you can find it HERE!