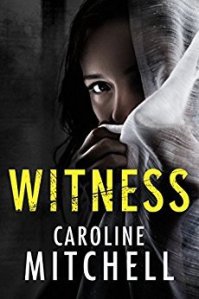 To Rebecca it was a brave decision that led to her freedom from domestic abuse. To Solomon it was the ultimate betrayal.

It’s been ten years since Rebecca’s testimony saw Solomon locked away. Enough time for the nightmares to recede, the nerves to relax; enough time to rebuild her life and put the past behind her.

Then one day a phone rings in her bedroom—but it’s not her phone. Solomon has been in her home, and has a very simple message for her: for each of the ten years he has spent in jail, Rebecca must witness a crime. And, to make matters worse, she has to choose the victims.

Fail to respond and you get hurt. Talk to police and you die. Ready to play? You have sixty seconds to decide…

As the crimes grow more severe, the victims closer to home, Rebecca is forced to confront a past she had hoped was gone forever.

What a fantastic premise to build a story on! We all know Caroline Mitchell is extremely talented, but boy did she out-do herself on this one. I’m a fan of her Detective Jennifer Knight series and have yet to read the first in her new Detective Ruby Preston series, but this was completely different than anything I’ve read from her. It was a leap of faith on her part and it paid off, because this is one crazy intense book! I’m thankful for two things: first that we had lots of time on the road this past weekend for holiday travels (yay reading!) and second that I can read in the car without getting car sick (yay reading!). I literally devoured this in one sitting and my only regret is that I didn’t make it last long enough.

The pacing, suspense, and intrigue were all of the highest, most gripping quality. My kids at times were going bonkers in the backseat, or so I’m told, but I didn’t notice because DUH! Solomon and Rebecca had me completely wrapped up in their depraved little games. This story is warped, disturbing, and twisty; go into this as blind as possible to reap the full experience of the book. I want to add that this is the second book I’ve recently read involving a woman in an abusive relationship that has explored the avenue of standing up to her abuser and pushing past the situation, rather than just staying in the relationship until one member dies. I’m not saying the book made it seem easy or simple; it was far from it. You can tell just from the description that this scenario is worst case, yet there is always that fiery fight that never quite dulls. I really like this new trend of strong women who don’t have it all together.

I won’t go into detail but wow! What a perfect ending. This book is a must read for fans of tense psychological thrillers. I simply can’t recommend it highly enough! Bookouture clearly has a track record of publishing winning reads and this is no different. I’m pleased as punch to see what a versatile writer Mitchell is; not everyone can tackle various forms of sub genre and excel so highly at it. Clearly this is the perfect time of year to read this as it can easily be tackled in a day off.  Add this to Mount To-Be Read; you won’t regret it!

Many thanks to the publisher for providing my copy via NetGalley; it was a pleasure to provide an honest review! 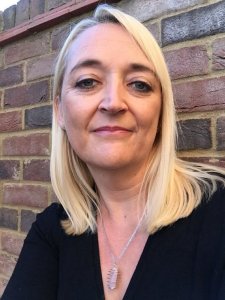 A former police detective, Caroline has worked in CID and specialised in roles dealing with vulnerable victims, high risk victims of domestic abuse, and serious sexual offences. She now writes full time. Published by Bookouture, her DC Knight crime thriller series reached the number one position in the Amazon crime charts and sold over a quarter of a million copies in the first year and a half of publication. The first in her new series, Love You To Death, features DS Ruby Preston is due for publication 11th November 2016. Her new psychological thriller, Witness, is published with Thomas & Mercer and due for publication 20th December 2016. Originally from Ireland, Caroline lives with her family in a pretty village on the coast of Essex. Sign up to join her Reader’s club for access to news, updates and exclusive competitions and giveaways.